It was with great sadness that we learned of the death of Alban O’Callaghan on 4th November.
Alban had been an active member of the club for so long, it was as if he were part of the fixtures and fittings. He was club president in 1980-81, a fitting recognition for the time he had spent on the club’s behalf over the many years prior to his election.
And while his executive participation may have ceased then, his involvement with the club did not. Until recent years, he was in regular attendance at all Club AIL matches, both home and away.
He was one of a special group who met up every Saturday, for decades, in the club lounge, no doubt discussing the progress and performances of the club that they had given so much to in the past and to whom our present members should be so grateful. That close group of friends included Enda Ryder, Timmy Duggan, Gerry O’Connor, whom he has now joined, as well as Fergus O’Nolan and Martin Donnelly and many others.
To Fergus and Martin we extend our deepest sympathy on the passing of a dear friend.
Alban was a club regular right up to the first lockdown in the Spring. He would always enjoy a drop on a Sunday afternoon, engaging in conversation with the much loved Maurice Downing and whoever else happened to be there, until faithfully collected by his son, Alban. He endeared himself to all by his natural warmth and friendliness.
To his wife, Maire, his children, grandchildren and great grandchildren, we offer our sincere condolences. 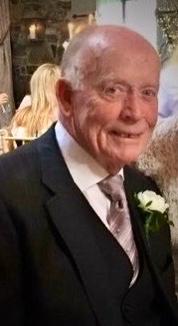