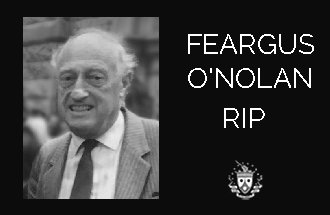 It is with deepest sympathy we learned of the passing of Fergus O’Nolan, our oldest past president on Tuesday August 2nd 2022.

The sad passing of Fergus O’Nolan calls time on those wonderful members who nurtured the Club in its early days. Joining the Club from school in the mid-forties, Fergus’ contribution was in the administration of the Club’s affairs from the very start.

Almost every year up to the time he was President in 1968-69 and for many years after, Fergus was an ever-present member of the Executive Committee, usually taking the role of Hon. Secretary or Hon. Treasurer.

When the Club undertook the building of a new clubhouse in 1962, at a cost of £8,000.00, Fergus was one of the ten members who gave personal guarantees for half that amount. The Carmelite Fathers in Terenure gave guarantees for the other half.
(To put that into perspective, two years later, houses in Cypress Grove Road were selling for £3750.00)

In the Jubilee Year of 1990-91, at the request of the incoming President, Joe Milroy, who felt that the contribution of Fergus O’Nolan to the Club’s affairs over many decades should be rewarded by him being part of such a joyous occasion, Fergus was elected Hon. Assistant Treasurer.

The growth and stability of the Club to the present day makes it unlikely that we would need a member to make such a contribution again.

But when we did needed one, how fortunate we were that Fergus O’Nolan was a member of our Club?