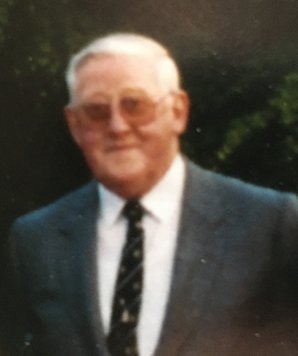 It was with great sadness that we heard of the death of Martin Donnelly on 14th April, less than eight weeks before his 97th birthday. Martin was the longest lived rugby club member. Throughout his long life he gave great service to the club. As with almost all rugby clubs in Leinster, new clubhouses were financed by running dances at the weekend. Our club was no different and we ran dances every Sunday from 1962 until 1980/81. Every weekend, with the exception of his holidays, Martin gave up his Sunday evening to act as cashier. He took in the cash from over three hundred young patrons, paid the band and cloakroom staff, and lodged the balance to the club’s bank the following day. This was before the advent of nightclubs and discos but by then our clubhouse had been paid for.

This selfless service to the club was undoubtedly responsible for him being voted as President for the 1970/71 season, in the middle of a golden era of our club rugby.
Martin worked as Traffic Manager in Aer Lingus. Over the years, he gave invaluable help in ensuring that any player who happened to be in England on business, was always able to catch a flight home for the match on Saturday’ as well as smoothing the way for any trips our teams would make abroad.
In the not-to-distant past, he would join many other former presidents in the lounge every Saturday in the early evening. Enda Ryder, Gerry O’Connor, Timmy Duggan, Alban O’Callaghan  and Fergus O’Nolan were all owed a debt that the club could never repay. All, except Fergus, have now gone to their eternal reward, Martin’s brother-in-law, Alban having passed away last November.
Martin lived a full life and was always supportive of the club in its endeavours. He attended the 1971 Lions Reunion dinner some years ago. Before the Covid crisis, he would be in the club early most Sunday evenings, often sharing a table with Alban and Maurice Downing. Sadly, that table is now vacant.
We extend our deepest sympathy to his sons and his wider family.
Book of Condolences