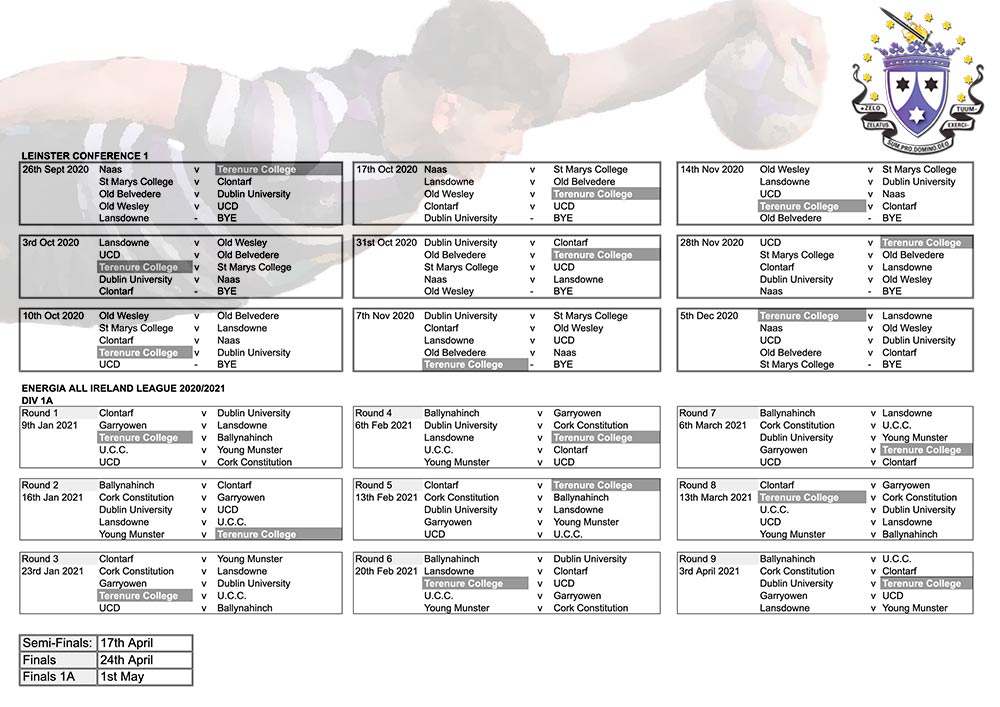 Clear space on the fridge door and crank up the printer! here is rugby fixture list.

The IRFU has just issued the fixtures for this coming season’s AIL and Energia Conference Series (ECS) fixtures, which are attached. The AIL commences on 9 January and the ECS on 26 September.

In Leinster there will be a J1 League shadowing the ECS fixtures i.e. there will be a second XV fixture between the same two teams at the same venue on the same day with the later KO of 4:30 pm. Lansdowne’s home J1 fixtures will KO slightly later again at 5:00 pm so as to facilitate warming up as there is only one pitch in Lansdowne Road.

As already communicated to clubs by the IRFU the top two teams in Conference 1 and the top team in Conference 2 will advance to the Energia Bateman Cup, Plate and Shield in the New Year.

The ECS is due to finish on 5 December, following which the Branch is organising Senior League playoffs. The top four teams in Conference 1 will play each other in the Senior League Division 1 semi-finals on 12 December (1st v 4th and 2nd v 3rd) with the top two teams playing at home. The two winners will play in the final a week later, 19 December.

The Senior League Division 2 playoffs will feature the top four teams in Conference 2 in the same format on the same dates.

In the J1 League there will be finals for the top two teams Division 1 and Division 2 on Sunday 13 December.

The Branch will also be organising a Senior Cup to commence on 5 September, the draw for which will be conducted and circulated early next week.

The structure of the season with regard to the Leinster and Metro Leagues will be announced next week while the uncertainty around university places will delay the announcement on the Under 20 season until early September.