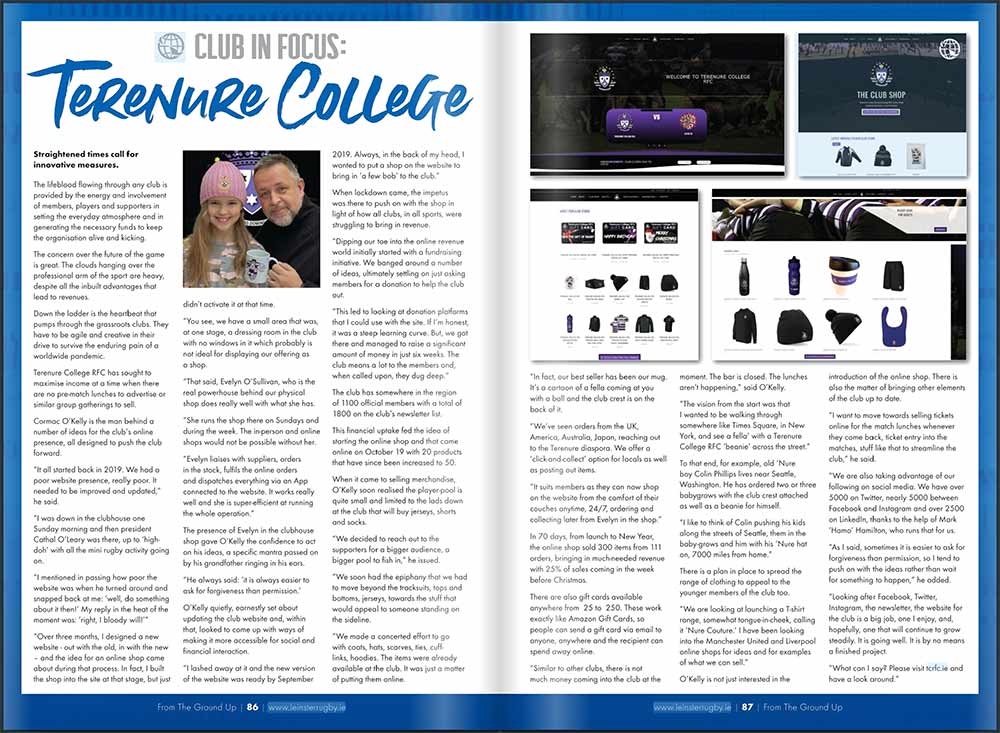 The lifeblood flowing through any club is provided by the energy and involvement of members, players, supporters in setting the everyday atmosphere and in generating the necessary funds to keep the organisation alive and kicking. The concern over the future of the game is great. The clouds hanging over the professional arm of the sport are heavy, despite all the inbuilt advantages that lead to revenues.

A long way down the ladder of priority is the heartbeat that pumps through the grassroot clubs. Sure, there is support to a point. But, essentially, the clubs have to be agile and creative in their drive to survive the enduring pain of a worldwide pandemic. Terenure College has sought to maximise income at a time when there are no pre-matches lunches to advertise or similar group gatherings to sell. 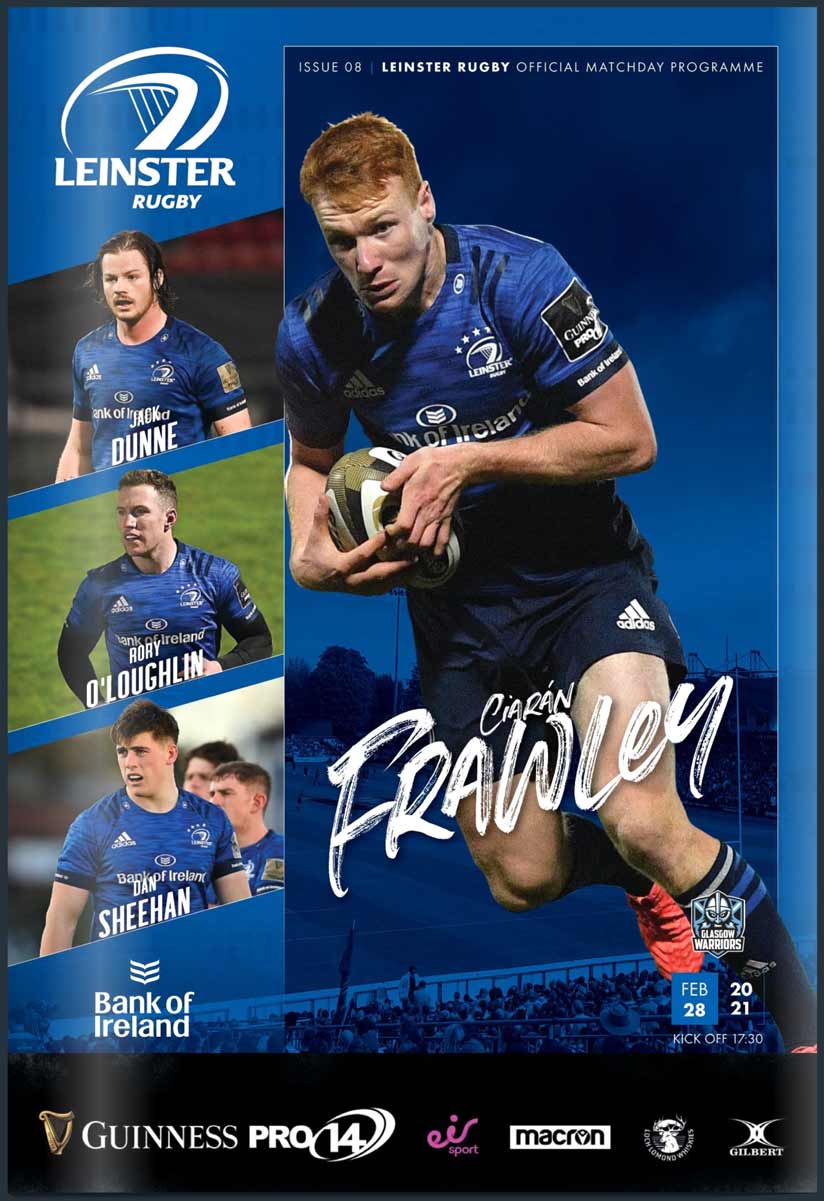 Cormac O’Kelly is the man behind a number of ideas for the club’s online presence, all designed to push the club forward. “It all started back in 2019. We had a poor website presence, really poor. It needed to be improved and updated,” he said. “I was down in the clubhouse one Sunday morning and then president Cathal O’Leary was there, up to ‘high-doh’ with all the mini rugby activity going on. “I mentioned in passing how poor the website was when he turned around and snapped back at me: ‘well, do something about it then!’ My reply in the heat of the moment was: “right, I bloody will.” “Over three months, I designed a new website – out with the old, in with the new – and the idea for an online shop came about during that process. In fact, I built the shop into the site at that stage, but just didn’t activate it at that time. “You see, we have a small area that was, at one stage, a dressing room in the club with no windows in it which probably is not ideal for displaying our offering as a shop.

All that said, Evelyn O’Sullivan, who is the real powerhouse behind our physical shop does really well with what she has. She runs the shop there on Sundays and during the week. The in-person and online shops would not be possible without her. “Ev’ liaises with suppliers, orders in the stock, fulfils the online orders and dispatches everything via an App connected to the website. It works really well and she is super-efficient at running the whole operation.”

The presence of Evelyn in the clubhouse shop gave O’Kelly the confidence to act on his ideas, a specific mantra passed on by his grandfather ringing in his ears. “He always said: ‘it is always better to ask for forgiveness than permission.’ He quietly, earnestly set about updating the club website and, within that, looked to come up with ways of making it more accessible for social and financial interaction. “I lashed away at it and the new version of the website was ready by September 2019.

Always, in the back of my head, I wanted to put a shop on the website to bring in a few bob to the club.“When lockdown came, the impetus was there to push on with the shop in light of how all clubs, in all sports, were struggling to bring in revenue. “Dipping our toe into the online revenue world initially started with a fundraising initiative. We banged around a number of ideas, ultimately settling on just asking members for a donations to help the club out. “This led to looking at donation platforms that I could use with the site. If I’m honest, it was a steep learning curve. But, we got there and managed to raise a significant amount of money in just six weeks. The club means a lot to the members and when called upon, they really dug deep.”

The club has somewhere in the region of 1,100 official members with a total of 1,800 on the club’s newsletter list. This financial uptake fed the idea of starting the online shop and that came online on October 19th with just 20 products that have since been increased to 50 plus. When it came to selling merchandise, O’Kelly soon realised the player-pool is quite small and limited to the lads down at the club that will buy jerseys, shorts and socks. “We decided to reach out to the supporters for a bigger audience, a bigger pool to fish in,” he issued. “We soon had the epiphany that we had to move beyond the tracksuits, tops and bottoms, jerseys, towards the stuff that would appeal to someone standing on the sideline.

“We made a concerted effort to go with coats, hats, scarves, ties, cuff-links, hoodies. The items were already available at the club. It was just a matter of putting them online. “In fact, our best seller has been our club mug. It’s a cartoon of a fella coming at you with a ball and the club crest is on the back of it. “We’ve seen orders from the UK, America, Australia, Japan, and Spain too, reaching out to the Terenure diaspora.

We offer a ‘click-and-collect’ option for locals as well as posting items. “It suits members as they can now shop on the website from the comfort of their couches anytime, 24/7, ordering and collecting later from Evelyn in the shop.

In 70 days, from launch to New Year, the online shop sold over 300 items from 111 orders, bringing in much-needed revenue with 25% of sales coming in the week before Christmas. There are also gift cards available anywhere from €25 to €250. These work exactly like Amazon Gift Cards, so people can send a gift card via email to anyone, anywhere and the recipient can spend away online.

“Similar to other clubs, there is not much money coming into the club, at the moment. The bar is closed. The lunches aren’t happening,” said O’Kelly. “The vision from the start was that I wanted to be walking through somewhere like Times Square, in New York, and see a fella’ with a Terenure College RFC ‘beanie’ across the street.” To that end, for example, old ‘Nure boy Colin Phillips lives in the USA. He has ordered two or three babygrows with the club crest attached as well as a beanie for himself. “I like to think Colin will be pushing his kids along the streets of Seattle, them in the baby-grows and him with his ‘Nure hat on, 7,000 miles from home.”

There is a plan in place to spread the range of clothing to appeal to the younger members of the club too. “We are looking at launching a T-Shirt range, somewhat tongue-in-cheek, calling it ‘Nure Couture.’ I have been looking at the Manchester United and Liverpool online shops for ideas and for examples of what we can sell.”

O’Kelly is not just interested in the introduction of the online shop. There is also the matter of bringing other elements of the club up to date. “I would like to move towards selling tickets online perhaps, for the pre match lunches and other social events whenever they come back and maybe even ticket entry into the matches, stuff like that to streamline the club,” he said.

“We are also taking advantage of our following on social media. We have over 5,000 on Twitter, nearly 5,000 between Facebook and Instagram and over 2,500 on LinkedIn thanks to Mark ‘Hamo’ Hamilton, who runs that for us.

“As I said, sometimes it is easier to ask for forgiveness than permission, so I tend to push on with the ideas rather than wait for something to happen. Looking after Facebook, Twitter, Instagram, the Newsletter, the website for the club is a big job, one I enjoy, and, hopefully, one that will continue to grow steadily. It is going well but it is by no means a finished project.

“What can I say? Please visit TCRFC.ie and have a good look around.”