‘What a privilege it was to be involved in such a fantastic experience, alongside such great people!’

It was always in the back of my mind as something that I really wanted to do! On applying for the role, I was involved in my 11th consecutive season working with the first team in Terenure College RFC and at that time, I honestly did not know that one of the most enjoyable and rewarding experiences of my life lay around the corner.

I owe a huge thank you to Collie McEntee, Kevin Beggs and Michael Collopy in the IRFU for trusting me and appointing me as Manager of the Irish Club XV, alongside Gearoid Prendergast of Young Munster RFC as Head Coach. Gearoid is someone I hold in the highest regard and someone who I worked very closely with throughout the campaign. I look forward to working with him again in this year’s Club International series where we will certainly look to retain the Energia Dalriada Cup.

I was also so lucky to be reunited with my close friend, and fellow Terenure man James Blaney as forwards coach. James is the current Head Coach of Blackrock College RFC and is another coach that has achieved so much in the game. I have worked with James extensively in his previous role as Head Coach of Terenure College RFC and I immediately knew we had the right coaching ticket to have a successful series! 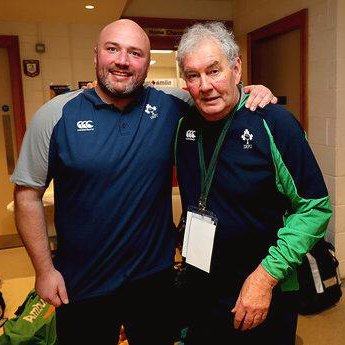 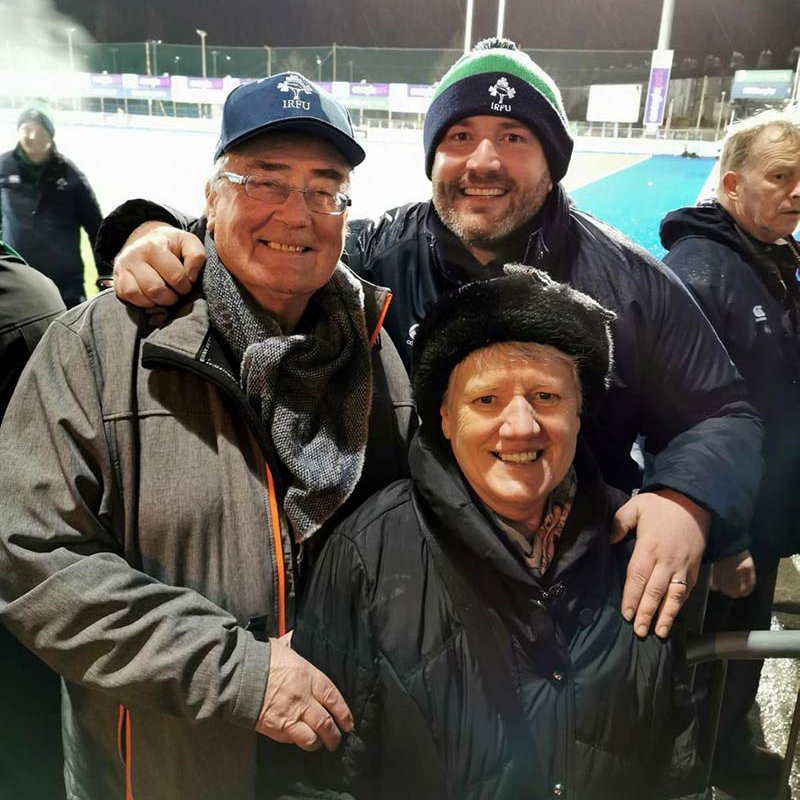 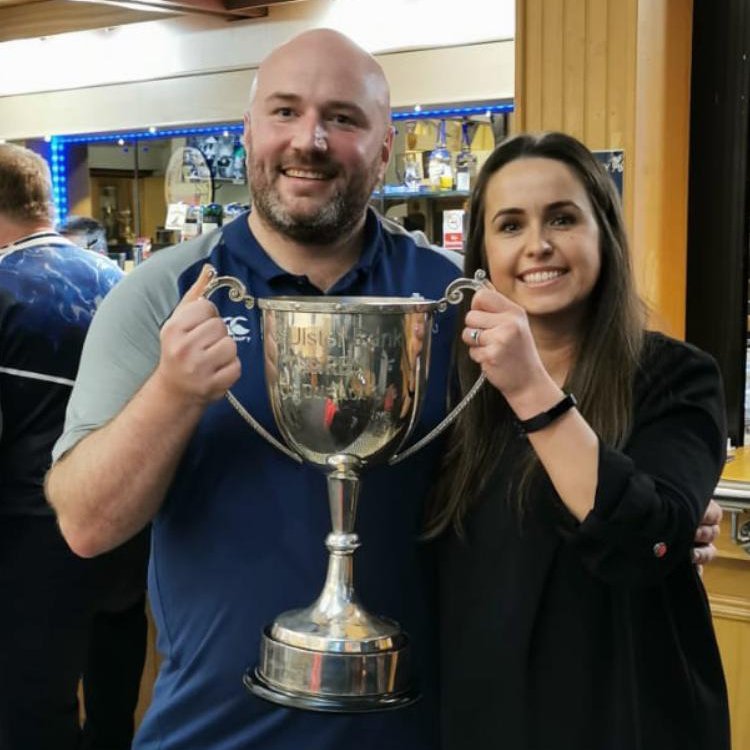 The rest of the backroom team comprised of; Rob Cassidy (S&C), Niall Kelly (Video Analysis), Ailbe McCormack (Physio), Stuart & Barry O’Flanagan (Team Doctors), Ross O’Donoghue (Media & Communications), Ian Connaughton (Bagman) and Jamie Turkington / Amanda Craig (IRFU), each of whom were technically brilliant, experts in their fields and a pleasure to work with. There was one individual in particular who really stood up to the plate, as Baggage Master, who literally made the experience for me. The great Paddy ‘Rala’ O’Reilly was bagman for the campaign, and he really is a man that epitomises the word ‘legend’. His expertise, calming influence, fantastic stories, and great humour contributed greatly to the instant settling of a squad, which comprised of so many new faces. I really believe Rala helped set an atmosphere that lead to a very successful campaign.

To represent a national team was an honour that I did not take lightly and it was something I put my all into. I was very aware that I was not just representing Ireland and the IRFU, but the four provinces and also every club in the country. To Terenure College RFC, a club I have been associated with since I joined in 2003, I could not have achieved this without your support and it was a privilege to represent you all. Huge thank you to Sean Skehan who supported me so well through the application process. Finally, thank you to my wife Jenny and my family who did not mind me running off for 6 weekends in a row!

At this point, I need to single out both Gearoid Prendergast and James Blaney for undertaking such an extensive review of all AIL players and especially those put forward by their clubs. We were extremely keen to ensure that the best and most in form players were selected to represent the Irish Clubs XV this season.

It was a 6-week program comprised of four training camps leading into the two Internationals against our Scottish counterparts, both vying for the Dalriada Cup. This year’s squad had the privilege of training at the Rugby High Performance Centre at the Sports Ireland Campus whose facilities are top class and allowed the squad train, and prepare as well as possible. We also enjoyed a session in the University of Limerick who also looked after the squad extremely well. Each Camp was as enjoyable as the next. The squad was extremely talented and in my opinion, really did represent the best of the Energia All Ireland League. It was however, the players commitment and work ethic that I found most impressive, alongside how close they all became in a short space of time. It was clear we had a special bunch of lads. 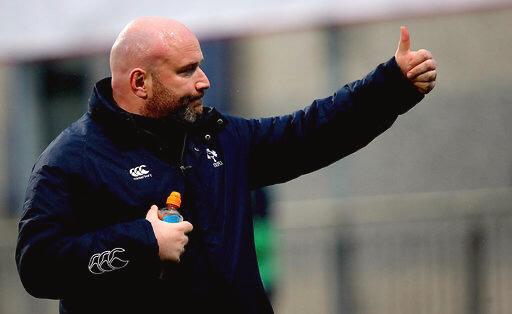 In total 40 players attended the four camps, 30 involved in the match day squads, which represented 13 different AIL clubs. We also were also fortunate enough to hand out 19 new Irish Club International Caps over the two games. Thank you to each club for allowing their players take time out of their busy schedules to train with us, during what was a very challenging AIL season last year in so many ways.

First up on 31 January, Scotland welcomed us to Galashiels, Edinburgh where we managed to come out on top with a record score of 39-17 in what was a very challenging encounter. Two late tries by Jamie Heuston and Matthew Byrne gave us a great advantage to take home to Dublin. Well done to Shannon man Aran Hehir on his Man of Match award. Huge credit must go to Jo-Jo and the Scottish rugby union for looking after us so well, and to Barony Castle Hotel who catered for all of our needs.

In the return leg in Energia Park on 7 February, we knew we had half the job done but could not rely on the 22 point buffer. It was a much closer affair in Dublin but our players were adamant to perform, and retain the trophy in front of the home crowd, their own club members, their friends and their families. We ended up winning the second leg 22-17, thus retaining the trophy in an aggregate score of 61-34. Well done lads! Another Shannon man, Pa Ryan secured the Man of the Match award in this game. Thank you to the Talbot Hotel in Stillorgan who were brilliant and looked after us so well!

A special mention to the captain, Alan Kennedy of Young Munster who lead from the front and by example, on and off the pitch. Alan is a top lad, and a very worthy skipper to lift the trophy on behalf of his teammates.

The opportunity to work with some of our very own Terenure College RFC players made the experience even more special. Huge congratulations to Michael Melia, Matthew Byrne, Sam Coghlan Murray, Adam Clarkin and Peter Claffey who were extremely deserving of their call-ups and represented TCRFC so well. Special mention to Adam La Grue and Liam Hyland who also were in the squad and I am in no doubt they will receive their Irish Caps in the years to come. The large Terenure representation is a sign of the talent that exists in Lakelands at present and I am in no doubt that the 2020 / 2021 season will be one we can all look back on for the right reasons come May.

In summary, the Irish Club International series was thoroughly enjoyable where lifelong friends were made. It was so unique in that a large number of rugby people from various backgrounds came together in such a small period of time to achieve a very successful outcome (on and off the pitch). Long may the Irish Clubs Series continue!

I look forward to the 2020 – 2021 campaign in the hope that Covid-19 does not affect this team attempting to retain the coveted Dalriada Trophy and continue to represent the AIL proudly.